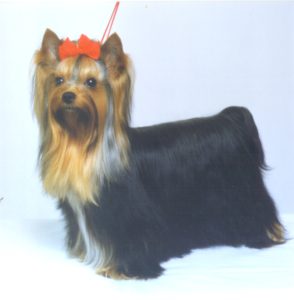 BRIEF HISTORICAL SUMMARY: The Yorkshire Terrier comes from the same locale as the Airedale Terrier and was first seen around the 1850s. The old Black and Tan Terrier is behind the Yorkshire Terrier, together with other breeds such as the Maltese and the Skye Terrier. The current name was accepted in 1870. The breed’s terrier-like qualities include the hunting instinct, be it for a toy in the house or a rodent in the garden.

GENERAL APPEARANCE: Long-coated, coat hanging quite straight and evenly down each side, a parting extending from nose to end of tail. Very compact and neat, carriage very upright conveying an important air.

CRANIAL REGION: Skull: Rather small and flat, not too prominent or round.

Hair: On body moderately long, perfectly straight (not wavy), glossy; fine silky texture, not woolly, must never impede movement. Fall on head long, rich golden tan, deeper in colour at sides of head, about ear roots and on muzzle where it should be very long. Tan on head not to extend on to neck, nor must any sooty or dark hair intermingle with any of tan.

Colour: Dark steel blue (not silver blue), extending from occiput to root of tail, never mingled with fawn, bronze or dark hairs. Hair on chest rich, bright tan. All tan hair darker at the roots than in middle, shading to still lighter at tips.

FAULTS: Any departure from the foregoing points should be considered a fault and the seriousness with which the fault should be regarded should be in exact proportion to its degree and its effect upon the health and welfare of the dog.

N.B: • Male animals should have two apparently normal testicles fully descended into the scrotum. • Only functionally and clinically healthy dogs, with breed typical conformation, should be used for breeding.

The latest correction is in bold characters.